Was very hot in Perth yesterday – 43 degrees according to the news and I don’t doubt it.  It was already over 30 at 7am when I caught the train and when I went out to get lunch, the air was so warm it felt like it was burning the inside of my nose.  You know when you get a blast of hot air from the oven when you open it – like that.

The office started to heat up a fair bit in the afternoon, so I came home early – just as well as all the trains were on a slow timetable because of the heat.  Over 40 degree days happen every summer, so why on earth would you build a railway that can’t take it?  The A/C on the train was really struggling too, especially as it was packed full 😦

Anyway, I got home (via the bottle shop and 12 bottles of cold beer) and was melting by then – I really must retire my English smart office trousers – they’re too thick material for this country.

Was bliss to get my shoes and socks off and get into shorts!

Went out to take some photos at Point Peron as the heat was causing some clouds to appear over the ocean – good chance of a nice sunset, but the clouds really rolled in and the sunset wasn’t like it could have been.   There was another photographer on the beach – a Belgian guy called Tim – who was pretty cool – had a good chat whilst snapping away.  He was getting some great pics straight out of the camera – I really miss my filters that got broken when my camera fell into the sea.

Despite the sunset colours being nothing to write home about, I got some corking photos.  I messed about a little in Lightroom and was pretty happy with what came out. 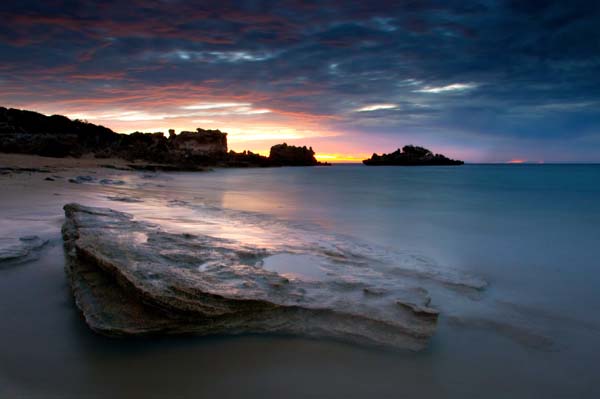