We had a stray kangaroo in the road today. First I saw of it was the dog going nuts at the window and the ranger pulling up outside. Followed by another one. And then the police and the wildlife officers

The roo was in the road opposite my house, so I popped out to see what all the fuss was all about. Together, the throng of roo catchers advanced down the road whist the wildlife officers prepared the tranquilliser (which took aaages, mixing this and that into a never ending set of vials).

Eventually, they set off down the street to shoot the critter full of slumber inducing drugs and hopefully catch and remove it. 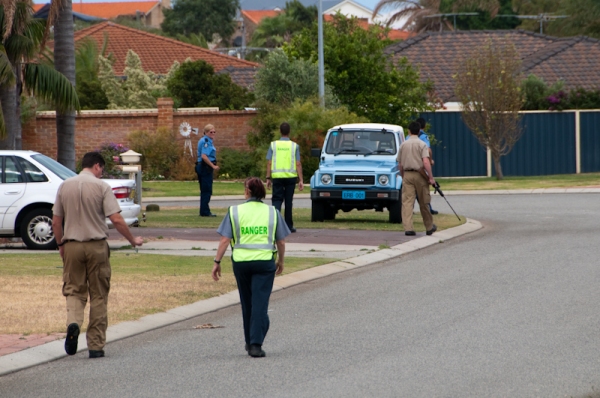 After a while, the deed was done and the guy with the gun came back to the car

leaving the rest of them to try to corner a drug addled and frankly probably pissed off kangaroo.

Now, bear in mind that roos can jump 6-8 feet with no problem and can run 30/40mph easily. So there began a comical stand off between the rangers/police and a few residents, including myself by this point as the roo dashed this way and that, quite unaware that it should be counting sheep by this point. 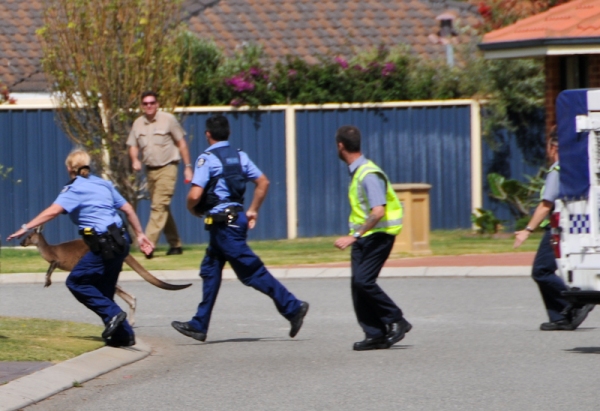 They fetched the big net ready to capture it, but it bolted up towards where I was standing – I managed to stop it escaping and it stopped for a breather

it soon bolted away again and despite the best efforts of the team, it leapt clean over the net, got upto full speed and shot past me doing huge random bounces.

And off the team scrambled in hot pursuit

Bit of fun for the day..