Well, whats been happening in the world of me?

My trip to England went well – the flight over was actually pretty painless, despite being sat next to a borderline Neanderthal on the plane from Perth to Singapore – he was laughing out loud to stuff on the entertainment system.  I mean really out loud.  Not good.  When I asked him something, he spoke like he had experienced a very bad head injury – I don’t think he had though, he was just very odd.

Anyway – Singapore Airlines – 5 stars from me – good food, good aeroplanes and excellent service.  Managed to sleep almost all the way to London too.

Went to collect my kids via my old local supermarket – I needed to buy jeans as for some reason, jeans in Australia are only available in one length to cater for all – so the legs are always 6foot too long, meaning I have to pay to have them taken up too.  Its maddening.  2 pairs of jeans and some stripy coloured socks later (you can’t buy coloured socks here either) and I was at my kids front door.  Its always so good to see them, they end up doing a little dance and their smiles blow away the travel fatigue in seconds.

We drove back to my parents house – was good to see them too – last time was when they were here for our wedding.

We had a nice week – the weather in England was shit though – what the hell happened to warm summers that I remember from when I was young?  It barely made it to 20C all week and rained loads 😦   We did still get out to the park, take a trip to London to go the Natural History Museum (never go in the summer holidays – it was packed full of rude johnny foreigners who have never heard of waiting their turn) and spent a load of time with my family. 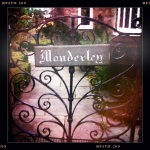 It was horrible to have to leave them again, but they were ok and missed their mum.  I stopped off at Hotel Chocolat to get some goodies before flying home again.

miraculously, I didn’t get sick this time!  I have a load of photos on film which are at the lab for developing right now – hopefully they’ll come back soon – I want to see how the Hasselblad did with taking photos of moving children 🙂