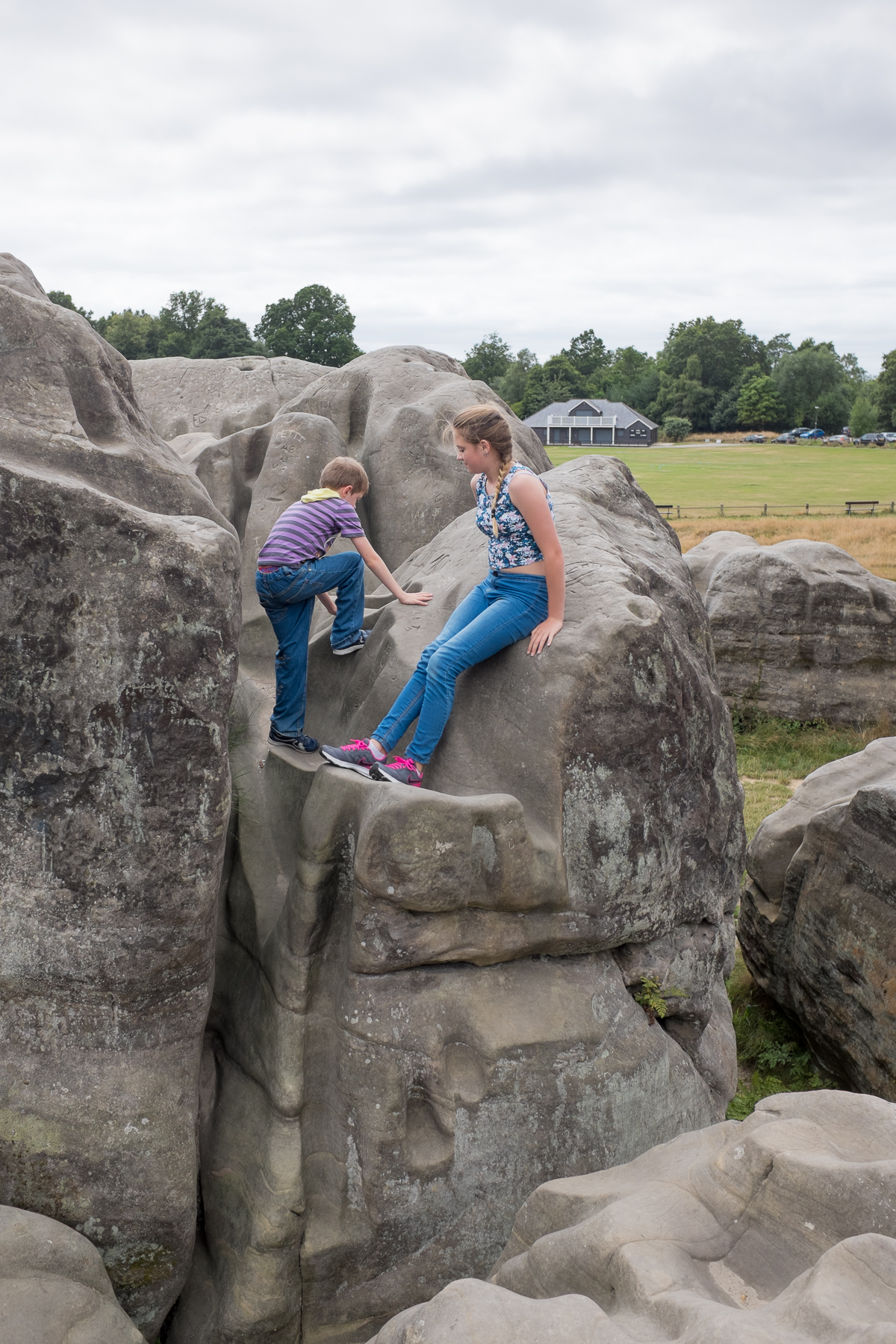 After a few hours scrambling over the rocks, it was time for food.

The kids decided that they didn’t want to eat in the High Rocks pub (fussy buggers, the food choices looked awesome) so we drove off in search of a cafe or something similar.

We wandered into Rusthall High St and settled on a little cafe called ‘The Daily Bread‘ – which was small and new and looked interesting.

Rusthall is an interesting place – the common is the original settlement with the older houses and the quaint cottages, but this gives way to 20th century terraces and a more working class vibe.  There’s clearly some gentrification going on – the little cafe we ate in was a classic example.  The lack of parking is something that all of these little towns and villages struggle with though! 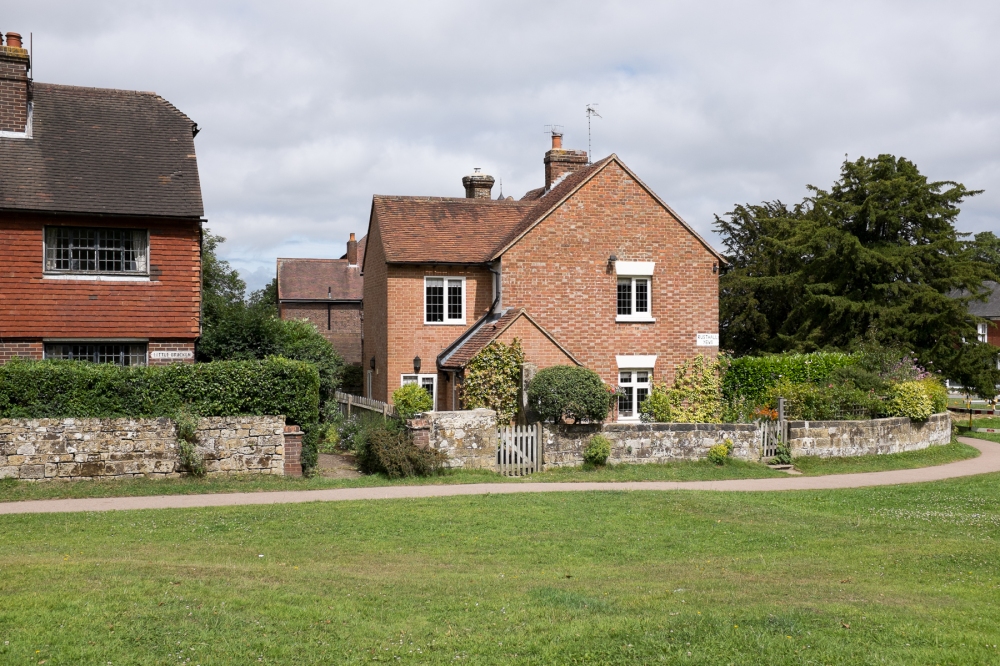 After a scrummy lunch, we trotted off in search of the rocks my grandparents had taken my sister and I to visit some 40 years earlier.

As I’d previously stated – I wasn’t sure where these rocks were other than there was a carpark on the edge of a kind of a green and the rocks were on the other side, and they were visible from Mount Ephraim. 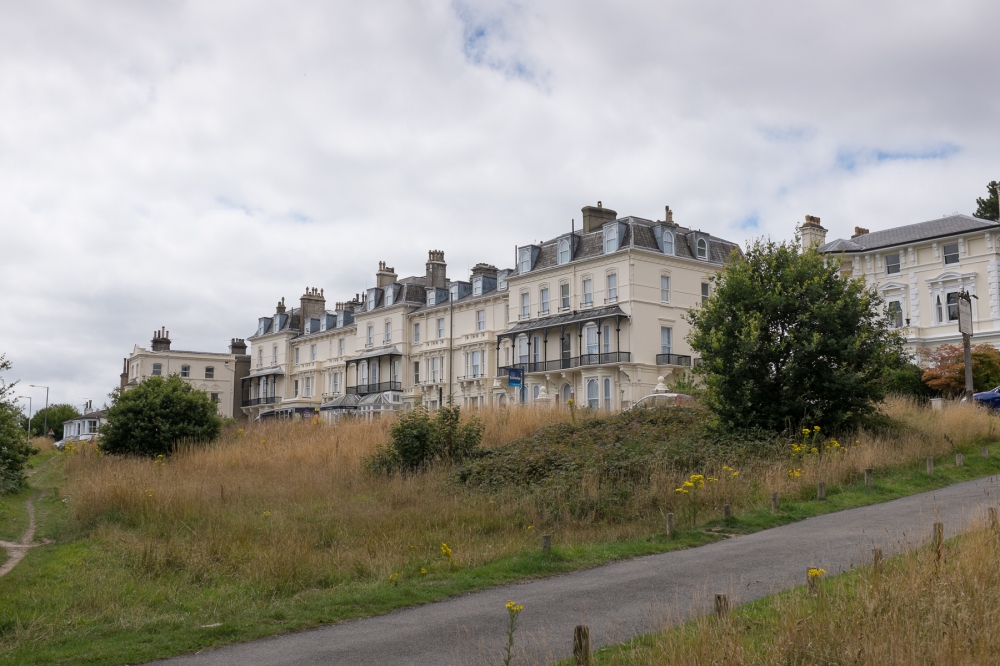 We went down a track and there before us were the rocks with the green (actually a cricket ground) and carpark that I had in my memory.  I guess the trees had grown up since I was a kid – either that or I’m remembering somewhere else!

The rocks were smaller than I remembered (because I’m bigger most likely) but there were clearly the same ones as my sister and I clambered across all those years ago.

The kids loved it – they were off like a shot, scrambling and clambering everywhere.  So that was a winner then! 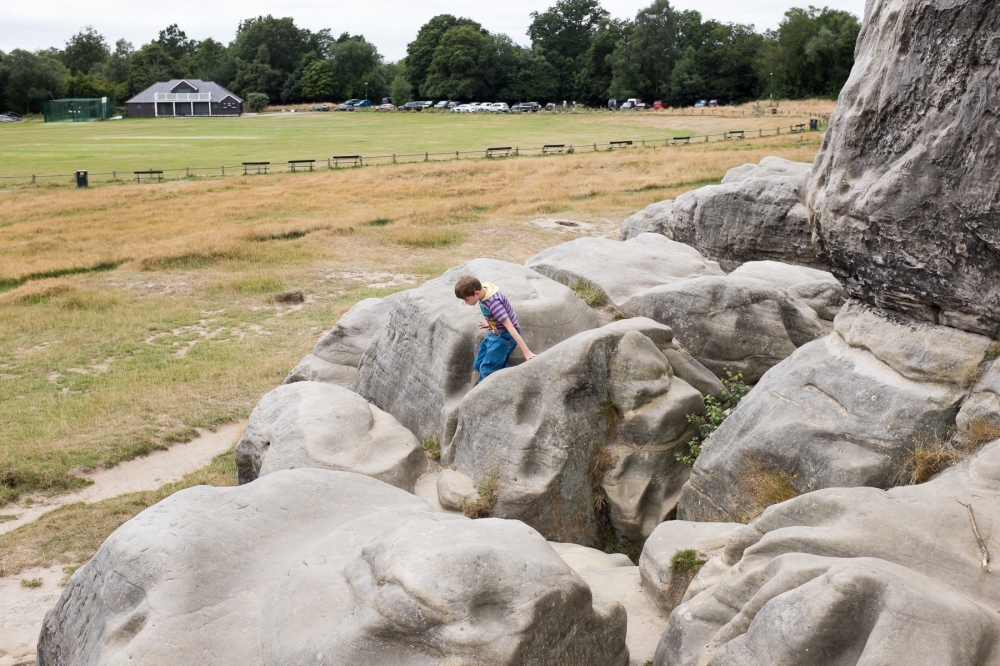 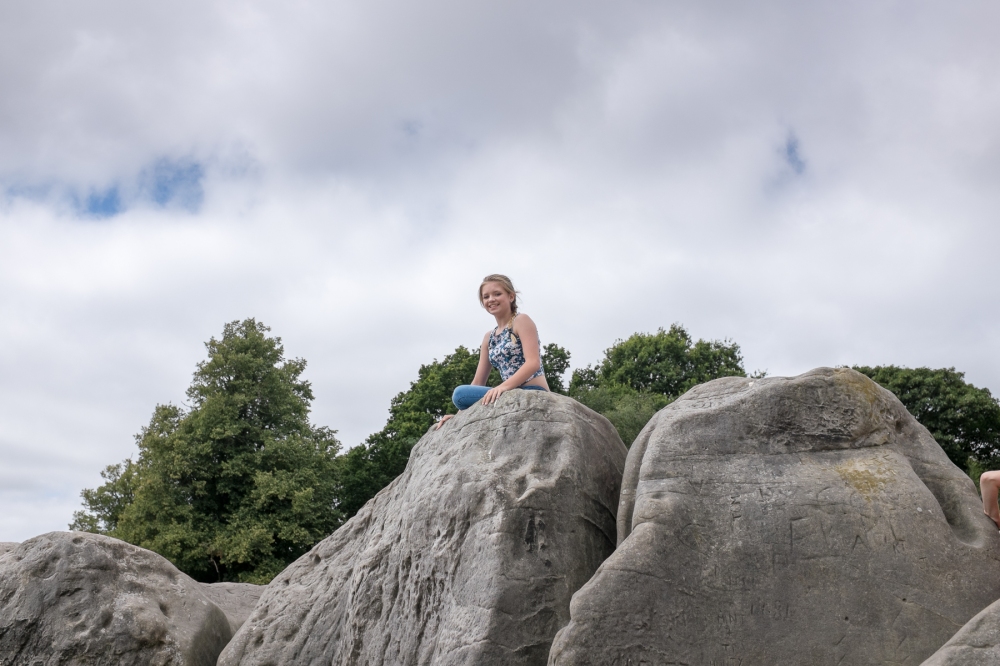 The rocks have been worn smooth by generations of children clambering all over them.  I remember this bit vividly from my childhood.  I’m too big and too stiff to get up to the top anymore though!

The kids had a great time, climbing, jumping, squeezing through cracks that I thought would have been too small but they are very bendy at this age! 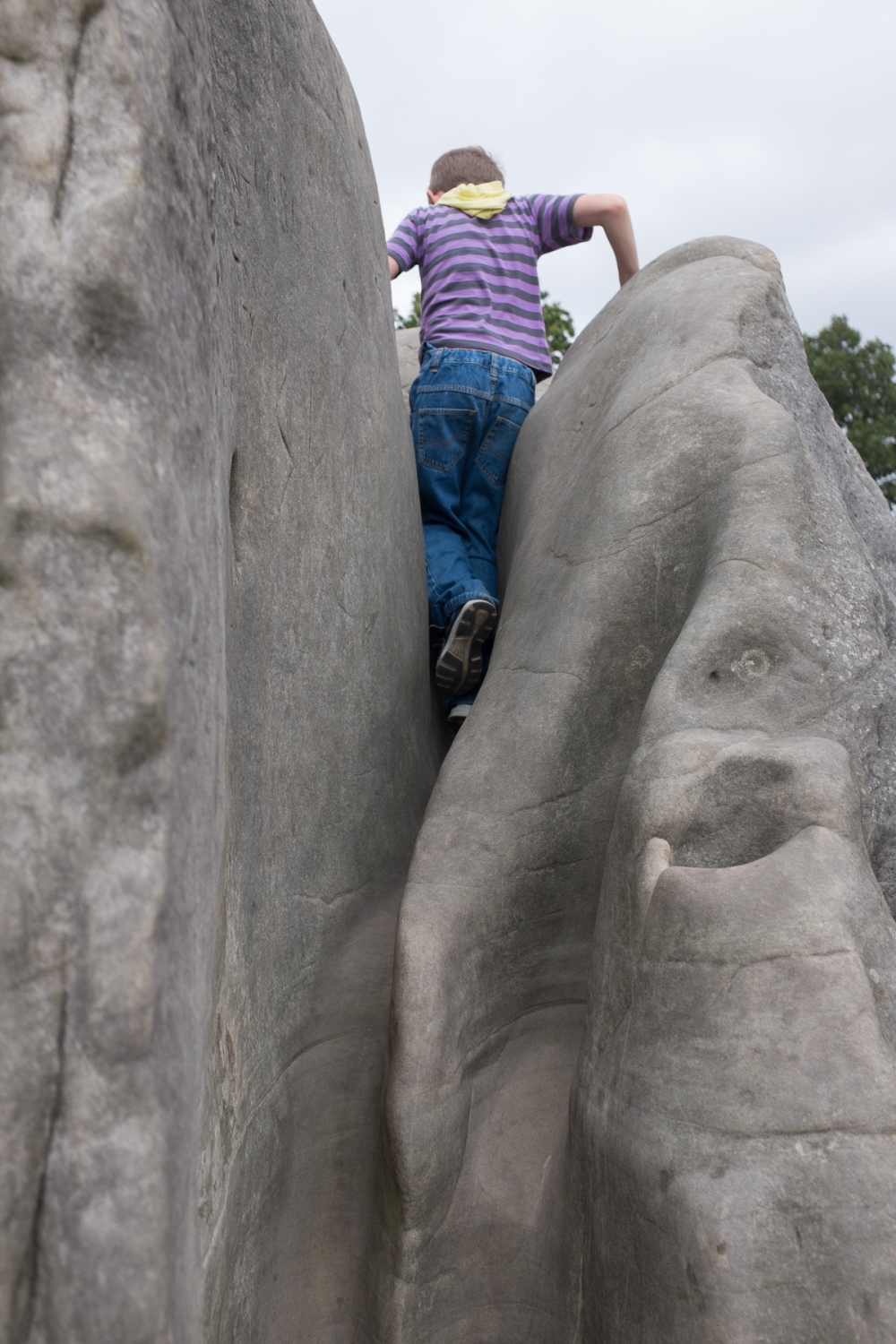 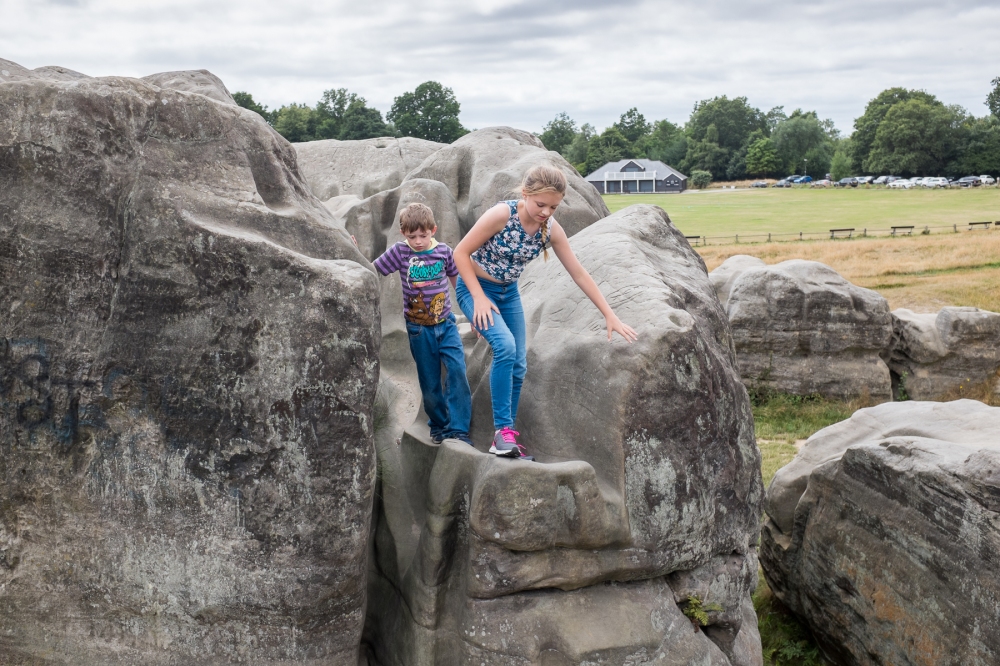 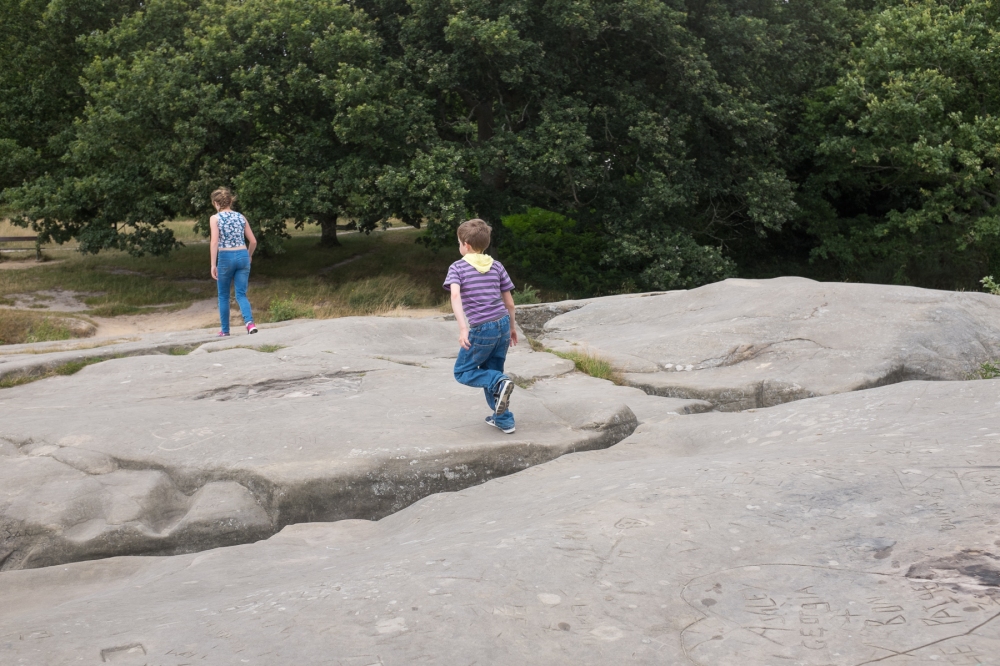 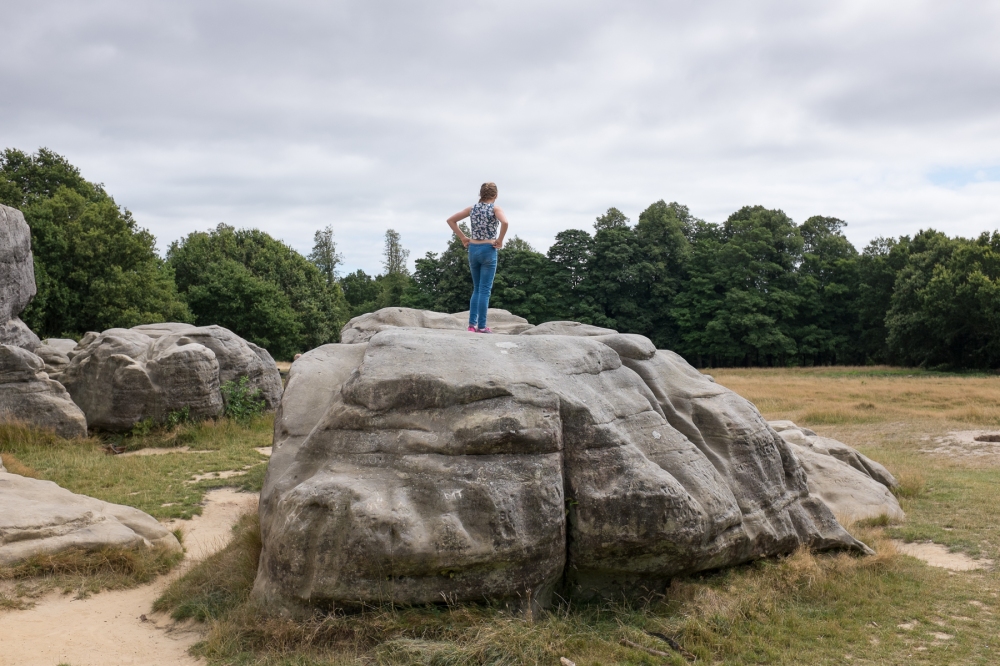 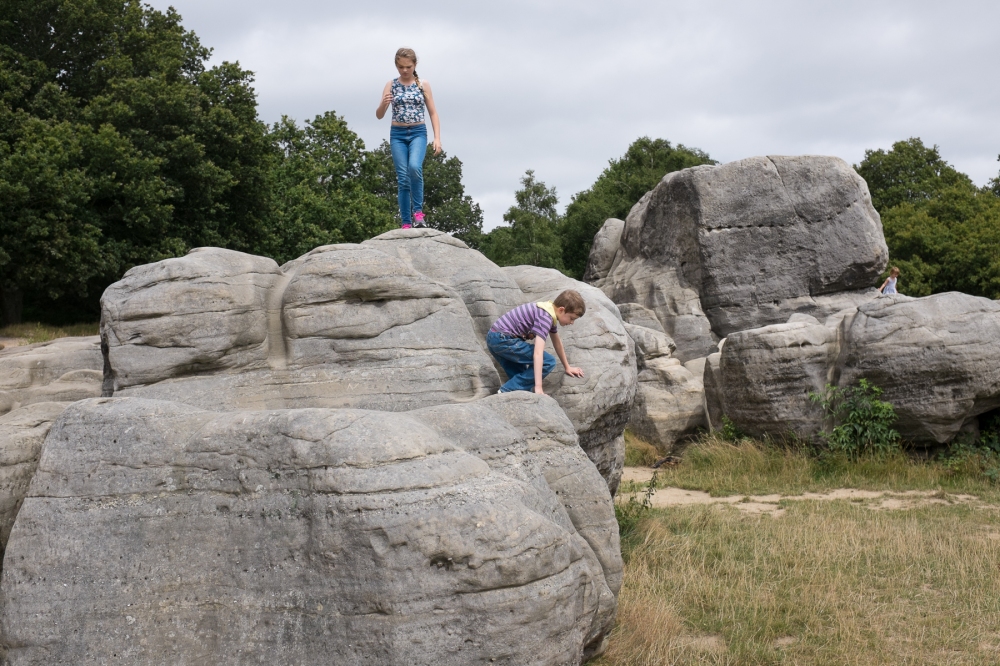 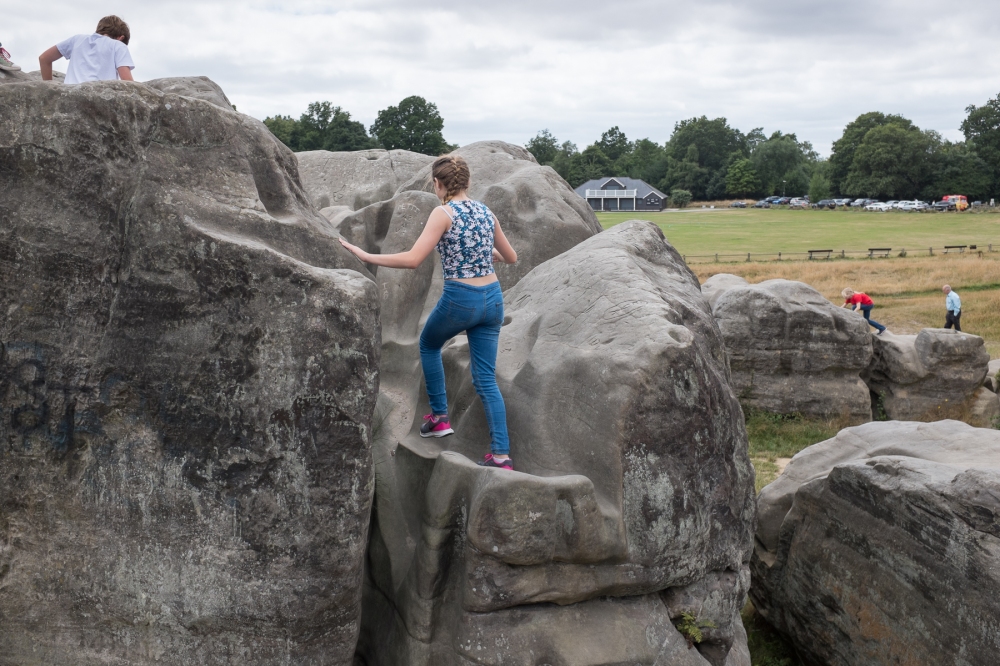 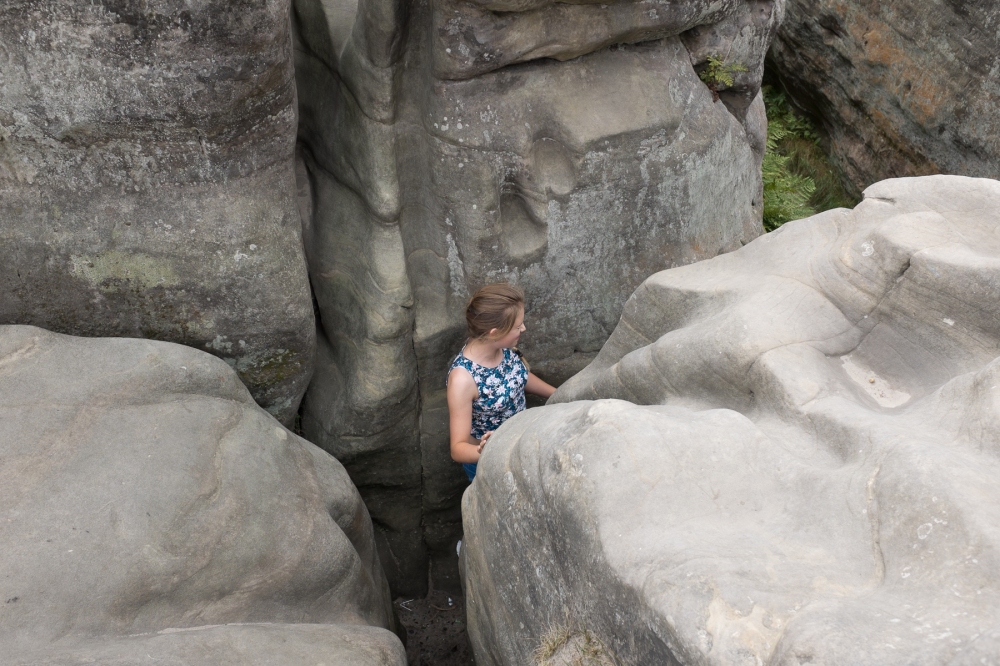 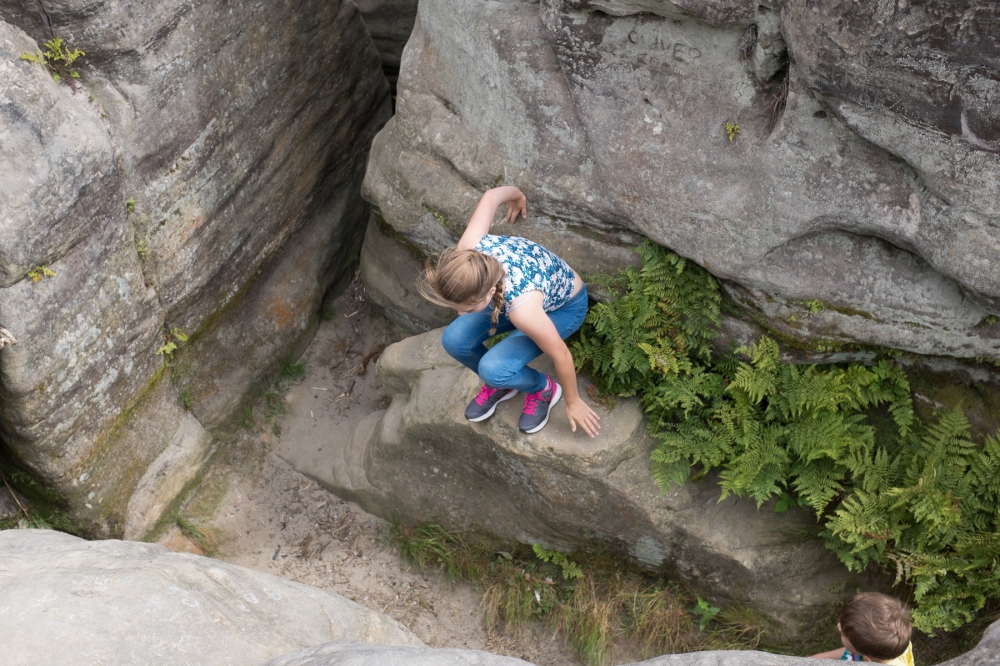 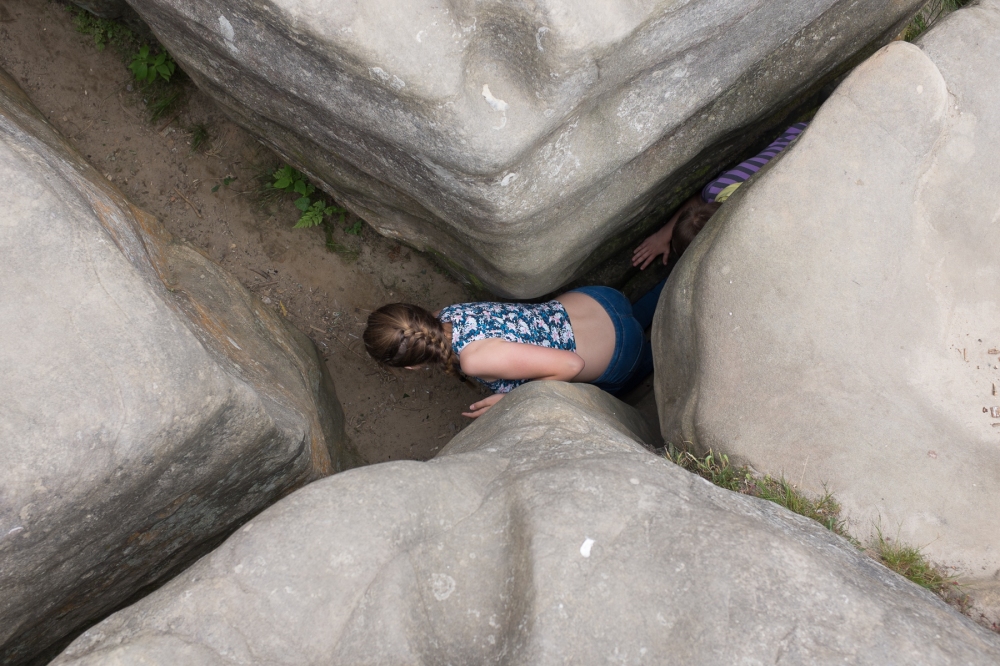 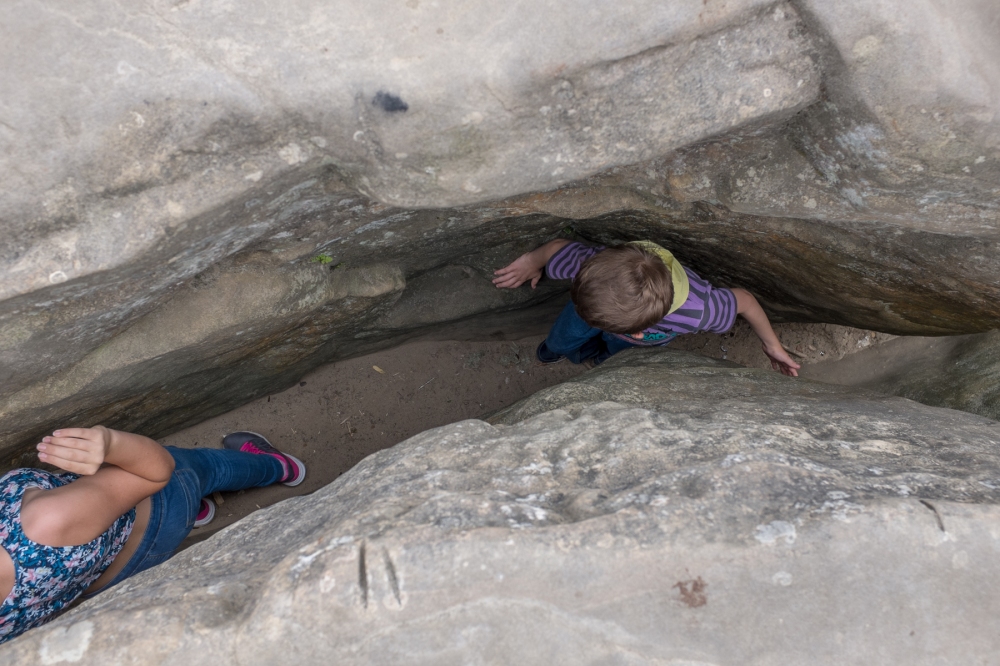 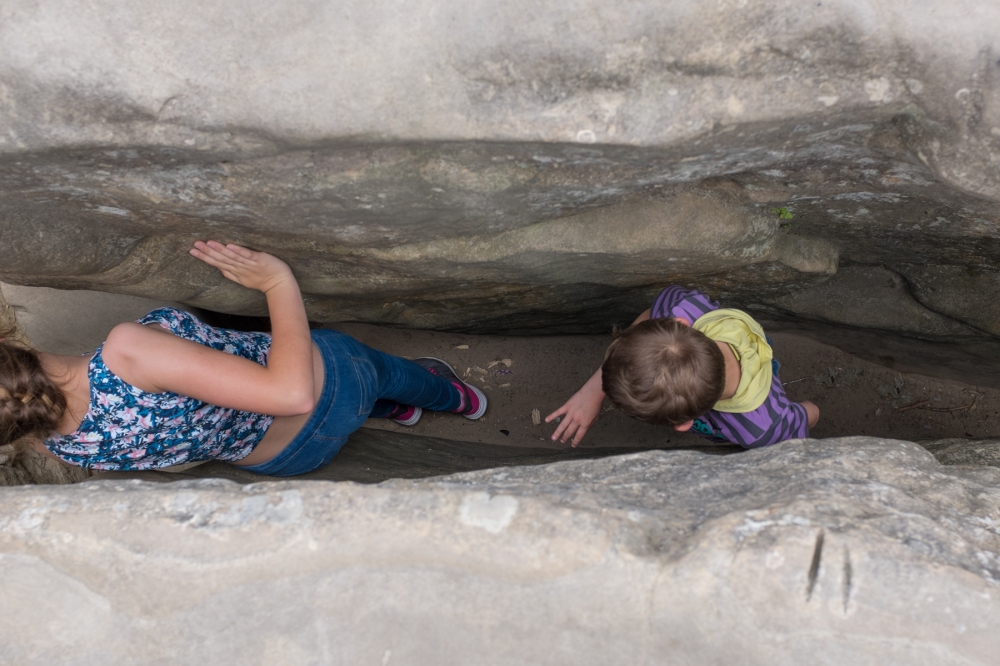 So much fun – we were there for a couple of hours and the kids really didn’t want to leave!

The geology nerd in me was checking out the cross bedding in the sandstone – laid down 140 million years ago in shallow rivers or lakes – the pebble beds above are most likely from flood events or movements in river channels, cutting across and eroding the finer sands. 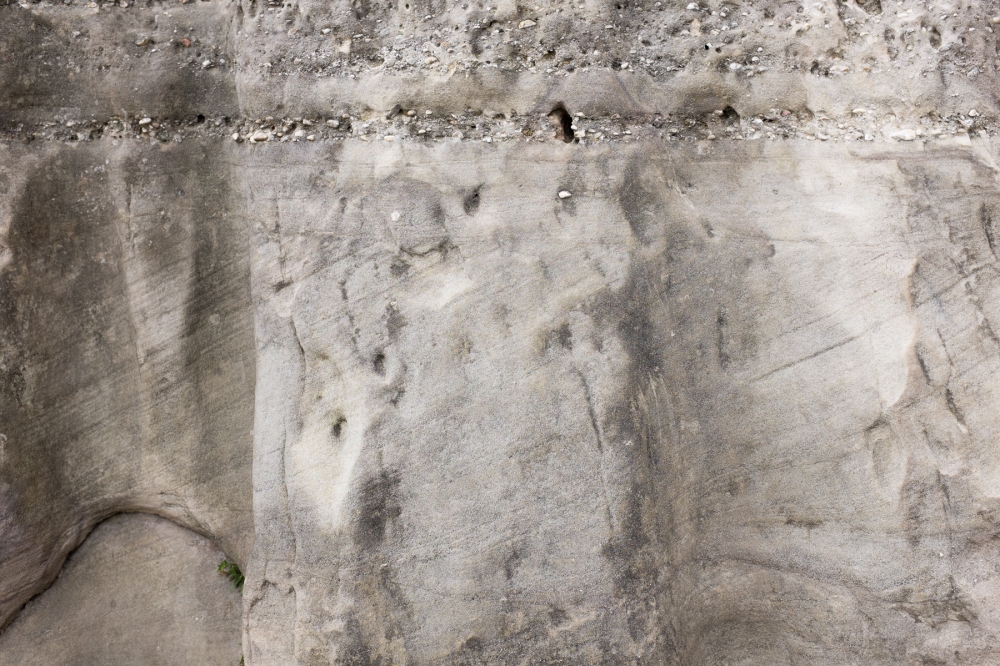 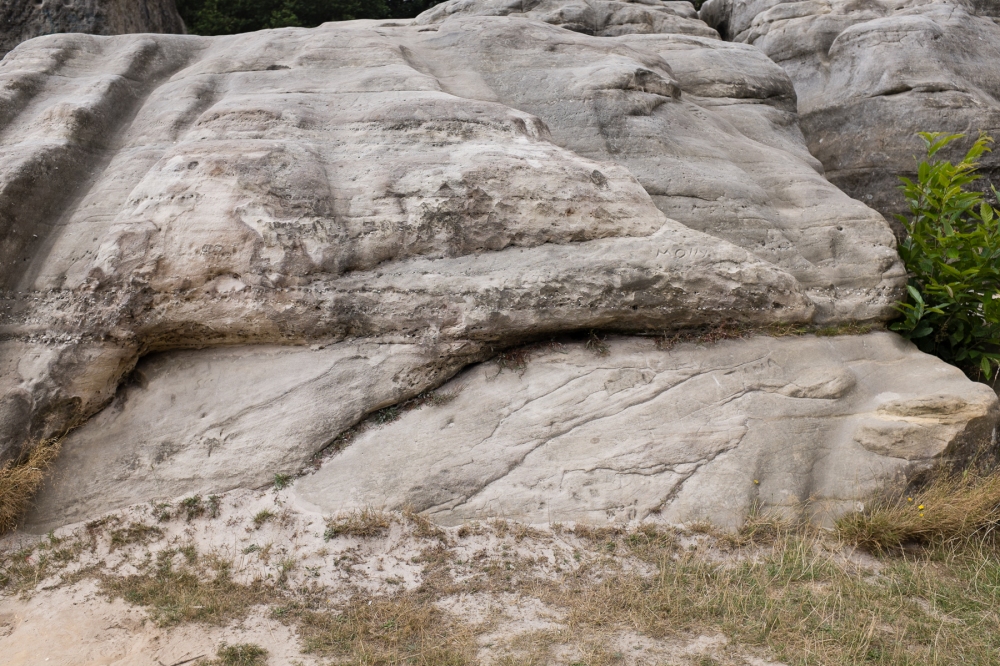 Looking at the geology of the region – the whole area represents a gradual marine transgression that occurred from 150 million years ago, where the ocean rose up over the land over a period of 100 million years and the rock series shows progression from freshwater river sediments through to shallow marine to the deep water chalk.  The whole series was later uplifted and folded into an anticline during the Alpine Orogeny approximately 60 million years ago.

In a later blog post, the kids and I went fossil hunting in the younger 100 million year old Gault Clay at Folkestone, which was great fun!