The tale of the kite and the moon 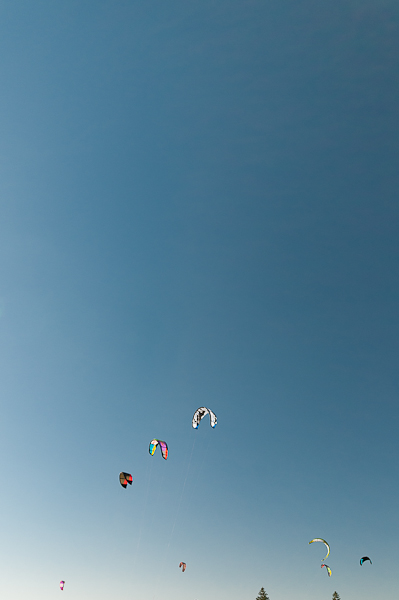 It’s been a while since I went down to Safety Bay and took some shots of the kite surfers – winter isn’t the best time for them to be out (we only get that reliable sea breeze once the daytime temperatures start to hit the high 20’s) and I’ve been busy with other stuff.

On the face of it, it looked good, there were lots of kites in the air and the wind was pretty strong but I’d left it a bit late and most folks were actually packing up 😦

Anyway, as I was there already I waded around the lagoon to the far side where the kite surfers hang out and where I had got some cracking photos before. I got chatting to a couple of other guys with cameras – one English bloke with 2 Nikons and expensive lenses and another tall chap who goes to the photography club I used to go to.  They had obviously been there for a while and already had their fill of shots for the day.  Was pleased to hear that the Nikon guy liked to get into the water with fisheye lenses – thats the spirit!

There were a couple of guys coming in close, so I made the most of it.  Trouble is, my camera would not focus no matter what I did.  90% of the shots I was going for ended up blurry and miles out of focus.  I’m not sure why – this needs investigating.  I’m sure its because Nikon are just about to release a D800 😉

So that was that – not quite what I wanted because of the focussing issues, but still, I had a good hour and got to go for a little paddle in the warm Indian Ocean 😉

As it so happens, it was a lunar eclipse on the same day, so after the sun was down and the moon hauled itself over the trees, we could begin to see the earth’s shadow eating into the full moon, leaving only a blood red globe hanging in the sky for half an hour before it all unwound again.

It was actually pretty cool – I couldn’t get the setting right at first, but then I managed to get a couple of decent shots of it as the eclipse progressed.  I was going to take a montage from start to finish, but frankly, I couldn’t be bothered 😉

8 Comments on “The tale of the kite and the moon”