Well, that really was most bizarre

Went in for my last day at work, mostly just to hand back my laptop and phone and stuff and it was very strange.  I had nothing to do, being my last day, so I just read the news and whathaveyou, chatted to a few people, went out for coffee, surfed so more.  And that took me to 10am.

I called my boss – that was fine, he’s a nice guy and I really like working with him.  I called a few other folks, most of them were out.

I got more of a farewell from the receptionist (who is lovely and like a lot of girls in that kind of role, really undervalued) than from my actual colleagues.

So in the end, it was just a couple of the guys for a pint at lunch and that was it.

As I said, bizarre.

Tonight – awesome sunset.  But I didn’t have faith that it was going to real shine and stayed at home.  Bugger.  It would have been awesome down at Point Peron, on the beach with the rockpools.  Ah well – live and learn.

I did take a pic from the front garden tho 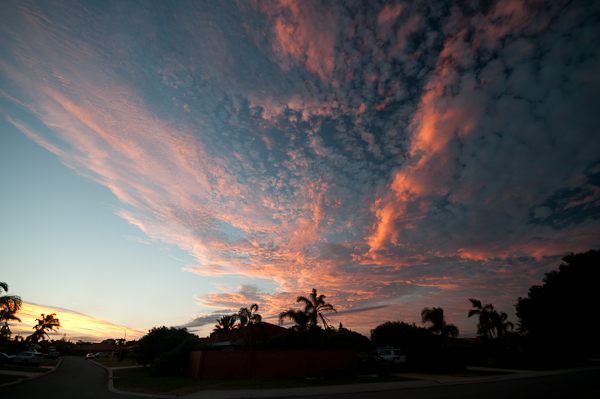 And now, I’m about to go get a bottle of wine to celebrate the end of one job and the start of the next.

Onwards and upwards, to insanity and beyooooonnnnnd.

10 Comments on “Well, that really was most bizarre”