Apologies for the lack of RWW posts for the last few weeks, but it’s just been too hectic with work and Christmas and all that.

Well, to make up for it, I am reviewing a Christmas present – 2009 Pepperjack Shiraz from the Barossa Valley

For those of you who don’t know, the Barossa Valley in South Australia, just north or Adelaide, is probably one of Australia’s most famous wine growing regions and one well known for Shiraz.  Interestingly, the Barossa has some of the oldest vines in Australia, many of them being relatively low yield in their dotage, but their deep roots exploring the mineral rich soil and prime growing locations means they also have some of the best and most complex flavours. 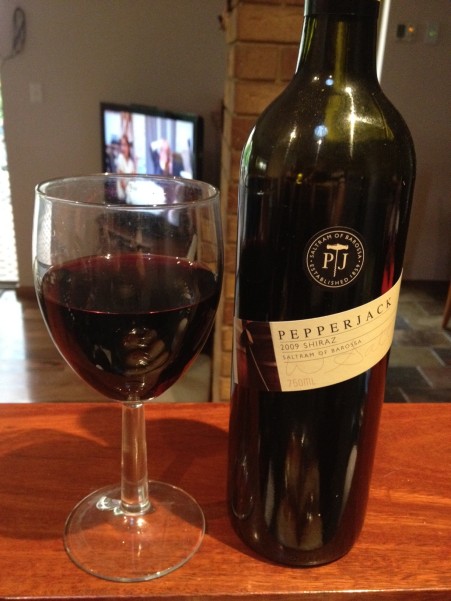 Presentation: It came in a box.  That spells class! The label is subtle and there’s no trite clever text of some of the newer wines.  It doesn’t need it.  It simply says ‘I’m from the best wine growing region, I’m expensive, I have nothing to prove’

Appearance:  It’s a deep rich purpley red colour, almost totally opaque like the richest Barollo or a heavy Merlot.  This could be interesting – the other Shirazes I’ve had lately have been quite a bit lighter.

Aroma/Smell/Bouquet:  Oh wow – this is very nice – rich, complex, full of fruit.  There’s a a smooth burst of deep berries and warm plum when the wine is first swirled in the glass, fading to reveal some very different notes – acidic, almost chemical – I can’t quite place it – it’s got a very subtle zest to it – licorice perhaps.

Taste: so soft, smooth and velvety in the mouth to start with – rich and inviting, but subtle.  After a few seconds, it builds and warms with lovely spicy peppery qualities and all kinds of spice and complexity

Finish: A soft berry finish with lingering peppery spice, helped by some great tannin and some slight sweetness – that licorice again.  This is a very nice wine, no doubt.

Verdict: Ok, I really like this one.  It’s a great solid example of what a Barossa Shiraz is all about.  Dark, peppery, rich with some sweetness in it too.  It’s quite subtle – it doesn’t wallop you with a mouthful of fruity burst like some wines can, it’s all velvet smooth and then the pepper kicks in and lingers with a great finish.   It’s a very nice wine and I want to drink this one again.

So there you have it, wine lovers – this has to be one of the best ones I’ve had in 2011.  A great finish to RWW for this year.  More next year as I explore the best of Australian red wine.