We’ve been on cyclone watch for the last few days as tropical cyclone Bianca has been making its way down the Indian Ocean from the tropics and is forecast to swing inland right over Perth today.

Well I think its petered out and although the wind is increasing and the sky is looking very dark all of a sudden, apparently its not scheduled to be the roof lifting monster that was once feared. In fact, you can hardly see it on the weather radar.

Good!  Being next to the ocean like we are here, we often get storms in the winter and just occasionally in the summer too and we’re well used to be battered by some pretty strong winds, but I don’t want to go through that kind of thing if I don’t have to!

Anyway, yesterday, out of the blue, we had thunderstorms arrive and they left a trail of destruction across the state – north and east of us got pummelled by this thing – causing damage everywhere.

It kind of missed us, we got some rain, lots of rumbling thunder, amazing skies and that was pretty much it.

Well, being the photo happy snapper I am, I had to get a shot 🙂 Cool, huh? 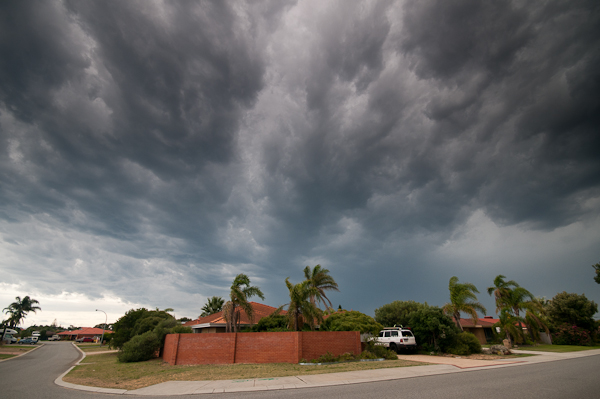 Later in the day I thought we were going to get the most amazing sunset – the clouds were just too thick though, but the skies were still very interesting, even if they didn’t glow and shine like I expected.

One minute it’s too hot, the next, nature decides you need a storm, the next its 38C again and then that very afternoon, a cyclone rolls over.  Australia, never a dull moment.